SEO for Writers: Why it Matters

I’ve been preparing to host a webinar on Saturday with my friend Jackson. We’re going to present a 7-step plan to writing and publishing short nonfiction as a way to create an income stream.

As I was doing that work, I started thinking about the different parts of my indie publishing journey. If I could impart one piece of wisdom on you — on any writer who wants to earn a living — it’s this.

Writing is a service industry. Sure. It’s art. But it’s also a major form of communication and what readers turn to when they have questions. If we can figure out those questions and answer them? Readers are willing to pay for that.

That’s how we become working writers.

I published my second short nonfiction book last Thursday. It’s all about creating income streams that will relieve the pressure off your writing, releasing it from the need to earn its keep while you’re learning.

This is all an experiment for me. I want to know if I can create a decent income stream by writing and publishing short nonfiction books on Amazon.

So far, the answer seems to be — yes.

There’s a learning curve. Some of it is steep. But so far, I’ve been able to create an income stream. My first book is earning about $500 a month, six months out. My second book is only a week old, but it’s on the same trajectory. It’s sold just about the same number of copies in its first week as my other book did.

Which means, if things continue that way, my indie publishing income will double.

There’s one thing that I think has helped me the most.

One thing I’ve learned a lot about in the last six months is SEO, or search engine optimization.

Maybe you know what that is. In case you don’t: SEO involves using keywords that real people (AKA readers) are actually using to search Google and Amazon.

So, my new book? It has a little bit of a clunky title. The Ninja Writers Guide to How to be a Writer: Creating Income Streams.

That’s my new book’s title. I told you — clunky. A little awkward. But also? It has that little bestseller tag. So does my first book, with it’s equally awkward title.

My first book has been a bestseller for six months. My new book was a bestseller yesterday, when I took this screenshot.

Let me show you why those awkward titles matter.

I wanted to call my second book Income Streams. When I went to www.ubersuggest.com--Neil Patel’s site that I use to research keywords — here’s what I found for ‘creative income streams.’

Ten people search Google for that keyword every month. Ouch.

So, I shortened it and looked at just ‘income streams.’

Better. Nearly three thousand people a month search — but the search difficulty is 66 — high. Maybe I’d rank, eventually. But it would take some time.

But, 110 searches? Better than 10, for sure. But not enough to drive significant traffic to my book. I’d still get the ‘Income Streams’ keyword, too.

I searched around, trying different keywords, until I landed on this:

Oh. There we go. More than 12,000 searches. The difficulty is high — 63. But, when I went to Google to check out what exactly the competition was, I found that it wasn’t anything I didn’t think a book on Amazon couldn’t overcome.

And, I was also pleasantly surprised to find one of my own blog posts on the front page of the search results.

That’s the story of how I got to my awkward title. I wanted to use the keyword phrases ‘income streams’ and ‘how to be a writer.’

It’s interesting to note that ‘Ninja Writers’ has 140 searches a month. Not a ton, but enough to make a difference in my books sales.

I can hear you over there.

You’re thinking — sure, but what if I don’t already rank for any keywords? What if I don’t have anything existing to drive traffic to my books?

There’s no time like the present. The reason I rank for ‘how to be a writer’ is because when I wrote a blog post with 25 tips for writers, I researched keywords for the title.

I didn’t choose a clever title. Or something pretty. I chose something people were already searching for.

They’re searching for it. Ubersuggest and sites like it exist to help us figure out what ‘it’ is. When we do that, we can write something that already has an eager audience.

Let that sink in for a minute. Especially if you’re used to writing things and realizing you’re entertaining the crickets.

The answer to a question, often.

And if you’ve got the ability to answer the question in the form of a short book? That’s the foundation of a nice writing-based income stream. Maybe it won’t be the book of your heart. Maybe it’s not exactly what you thought you wanted to write.

But it’s what your readers want/need. And that means they’ll actively search out and buy your book, if you give them the answer. 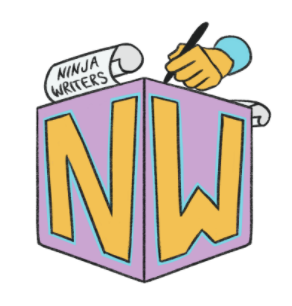 Ninja Writers is an online school and community where writers can connect, grow, and become the very best they can be! Let us help you become a novelist, a working writer, a blogger, a memoirist - whatever your little ninja heart desires.

Follow us on Medium to read all of our helpful articles.